Disney could be an attractive buy. But is it a flower or a weed? 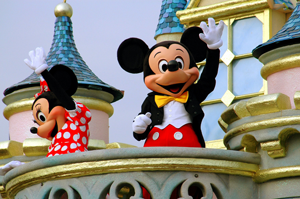 The first rule before buying a stock is to assume that all known information about a company is already reflected in the stock price. The current price is the majority appraisal of a stock’s worth at the moment.

A second rule is to challenge analysts’ recommendations and price targets, as they are based on assumptions that may or may not materialize.

So instead of price targets and analysts’ recommendations look for changing investors’ growth expectations. Changing expectations are usually reflected in actual price movements, increasing money flows and improvements in the stock’s performance relative to the market—or, in other words, relative strength. The more pronounced the relative price advance or decline, the greater the likelihood that the majority appraisal of a company’s worth is changing.

That said, buying on technical factors alone is risky. Investors should seek a second confirmation, such as quarterly earnings reports, management guidance, and competitive landscape.

So let’s look at Disney (DIS). Is it a flower or a weed? Disney is a “cult stock.” That is, investors are usually attracted to the story, tend to be always bullish on company prospects and ignore valuations and conflicting evidence. These stocks tend to look like flowers but could be flowering weeds.

A stock’s price movement relative to the market as a whole is the most basic measure of whether market participants—including all insiders and experts of various types—perceive a company to have an advantage. At its most basic level, relative strength suggests that some prospects at the company are changing.

Disney has had negative relative strength since April 2017, which places it in the “weed” category. The stock traded in a narrow price range during this period, between $112 and $98. However, current relative strength has turned positive, approaching a critical price pivot point.

Disney is attempting to buy 21st Century Fox in search of more content to remain competitive in the streaming world. Disney’s portfolio currently includes: Pixar, Marvel, Lucasfilm and iTown Studio—helping it compete against Netflix. With ABC, ESPN and other cable networks, Disney remains competitive in this new entertainment age. The theme parks’ revenues are solid and ESPN’s outlook appears stable.

The major concerns include:

The major acquisition of the Fox assets and strength of the studio movie pipeline could propel the company into the “flower” category. It may be time to plant a new Disney seed, as it could turn out to be a pretty flower.